The adaptive sports run in beaver meadows 20 seats 8 jeeps 1 ford truck in this this trip, the kids had a great time with the bumpy roads.

This was our largest project since Elwood Pass a few years ago. The “Notch” at the end of La Plata Canyon has been getting graffiti and tagged for over 20 years but has gotten much worse over the last few years. We did see some tags dated 2002. This was talked about 2 years ago and we had to get all of the right permissions as it is a county road in the National Forest and used eco-friendly chemicals so the EPA even was contacted. Last year a few members went up to the Notch with power washers and scrub brushes. After several hours they made almost zero progress so another plan had to be made. Our club then contacted Stephen Singer with Keeping Colorado Beautiful as they are a non-profit that does graffiti removal. He was interested in the project so he come down from Colorado Springs and worked with officials to remove the graffiti at X Rock by Durango and then him and Glen Hood went up to the Notch to check it out. Stephen was hopeful this could be done even though he hadn’t done removal at that high of elevation at 12,000 feet and cool temperatures. His chemicals don’t work when it is under 60 degrees so he had to go to anther chemical called Elephant Snot that works at lower temperatures. The other problem was there is not water up there. So we had 3 trucks with large water tanks haul water up there. The drivers later said it was a long, slow, rough drive up there.

The workday was then set for August 28th. On the 28th we had about 10 club members, 2 from the Colorado 4×4 Girls, Stephen Singer, and KOB4 news out of Albuquerque. A few brave souls had camped at the base of the Notch the evening before and were looking forward to some warm sunlight. Stephen was confident this would be done early in the day and we took him up on that bet. When we got up there several people went around with note pads and tape measures and started measuring the tags. It appeared to be about 5000 square feet of graffiti. The process was fairly simple but the elevation made things more difficult. The rock in the sunlight got a paint sprayer coat of his normal remover and the rock in the shade got Elephant Snot applied by hand with paint brushes because it was so thick. After it was all applied we all took turns with scrub brushes on long handles to work the cleaner into the paint. Then we had to wait about 30 minutes for it to react to the paint. After 30 minutes we used to power spray washers to wash off the cleaner and paint. The sprayer gas engines didn’t want to run very well at 12,000 feet but they did good enough to wash most of the paint right off. Some of the white and yellow paint did not want to come off completely so we reapplied the chemicals and stopped for lunch. Lunch was brought up by Dave Sunderland and was donated to us by South Serious Texas BBQ. After lunch we ran the power washers over the last few spots and they came right off also. We are all finished before 2:00 and had plenty of time to go slowly down La Plata Canyon and back to town.

Special Thanks to Stephen Singer and Keeping Colorado Beautiful for doing all he does and donating the cleaning solution; Colorado 4×4 Girls for coming and helping; Tuffy Security Products for donating brushes, gloves, glasses, and other supplies; La Plata County Government road crew for letting us close the road and donating a truck to use; Serous Texas BBQ for lunch; KOB4 News out of Albuquerque for featuring this on the news (click here for the feature); and of course all the CJG members that made this possible.

We had a wonderful day to clean up our section of highway and then a fun run over Stony Pass after.

We had a wonderful crowd of just over 40 at the Elks Club park for our annual meeting and potluck.

We were invited to attend the Bayfield 4th of July parade this year. We had 8 Jeeps join on the extended parade route.

Doug Ramsey lead a group of 6 Jeeps and 2 pickups to some seldom seen ruins in the Hovenweep National Monument area. We started at Cannonball Mesa Ruins, then onto some petroglyphs and lunch, over to Cajon Mesa Ruins, and finished at Holly & Hackberry Ruins. It was a great day had by all.

There were 10 rigs out for some social distancing fun in the Rock Garden.Â  For late November we couldn’t have asked for a better day or turn out.Â  Our fearless leader was Kevin & Beth Fox.Â Â 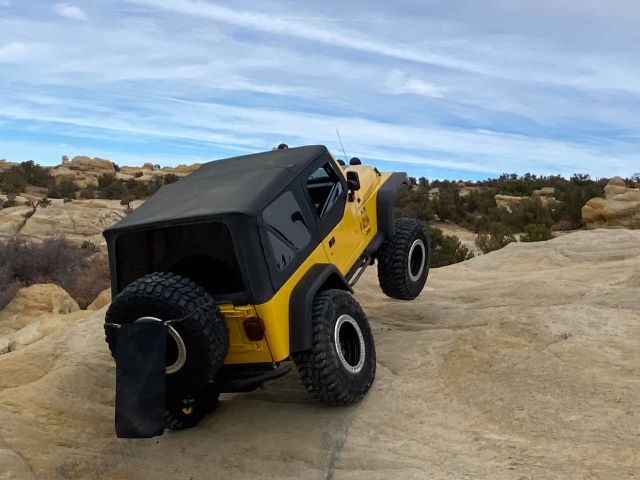 Â Billy Schulthiess had to show off getting a little air. 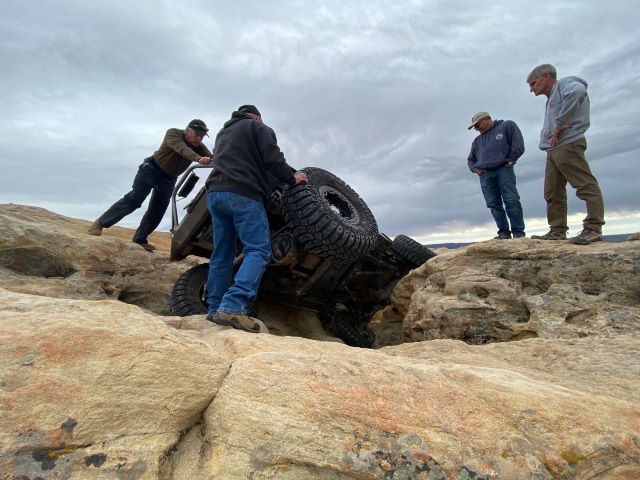 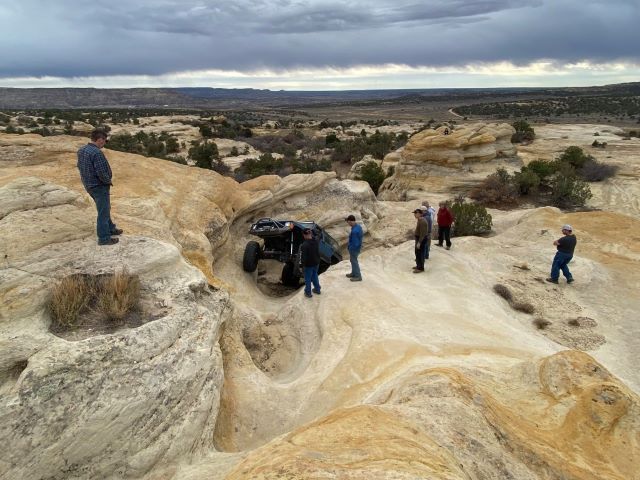 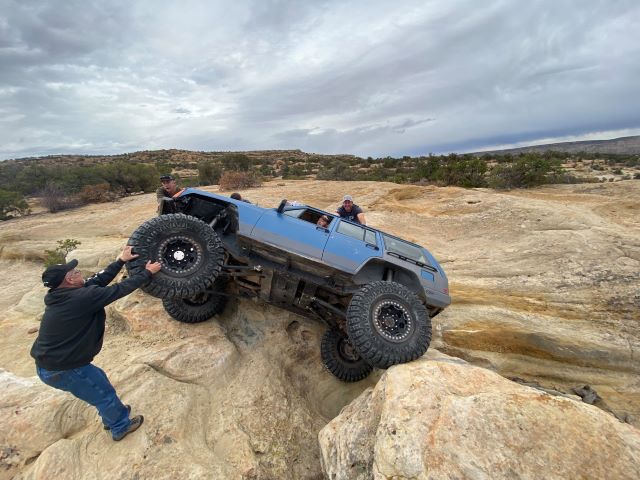 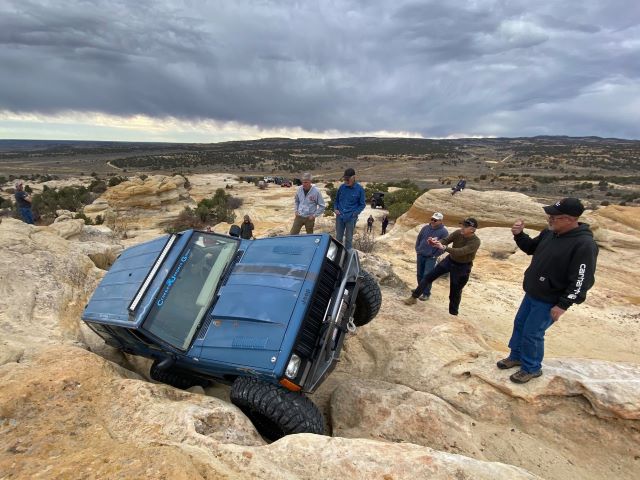 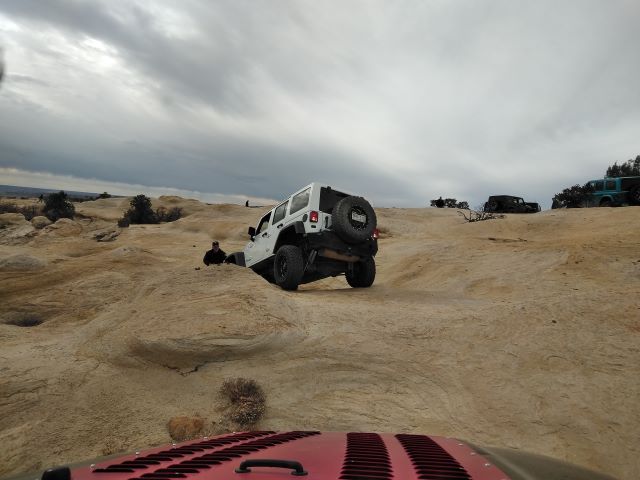 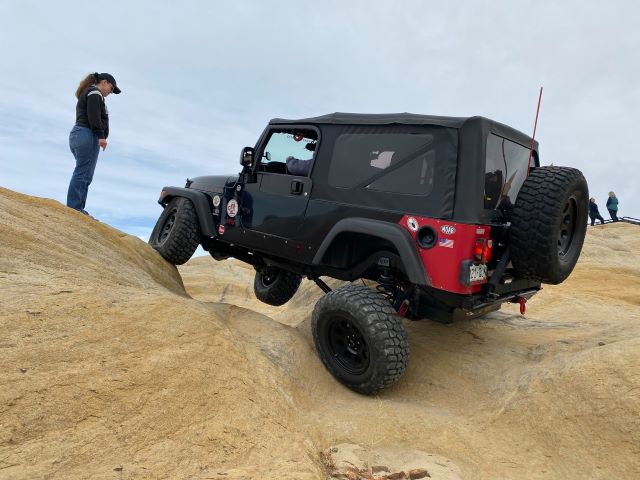 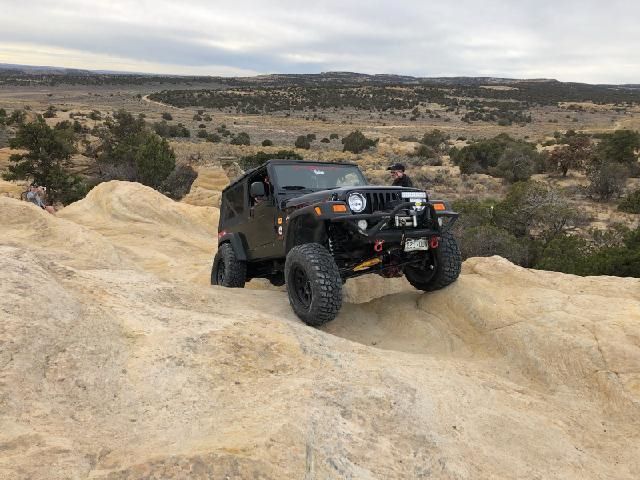 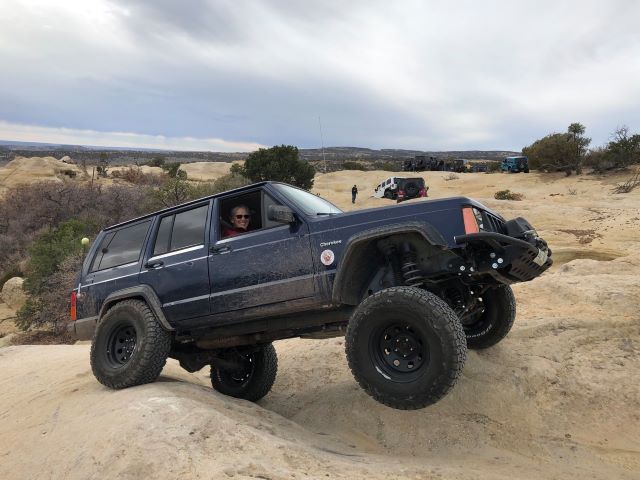 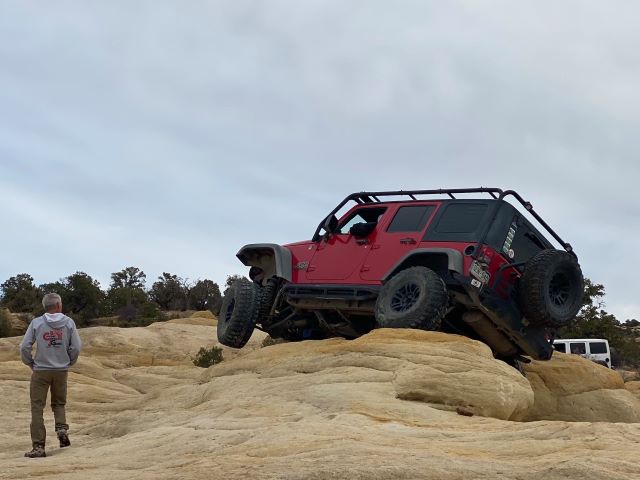 Jeff Titus joining in on the 3 wheel action.

Frank and Sandy Taylor’s daughter Lisa set up a surprise 50th anniversary party for them on the top of Black Bear Pass.Â  They had planned a get away but COVID-19 put an end to that so that opened up the opportunity for this.Â  They had no clue until the signs were up.Â  We had 28 vehicles and almost 60 people. 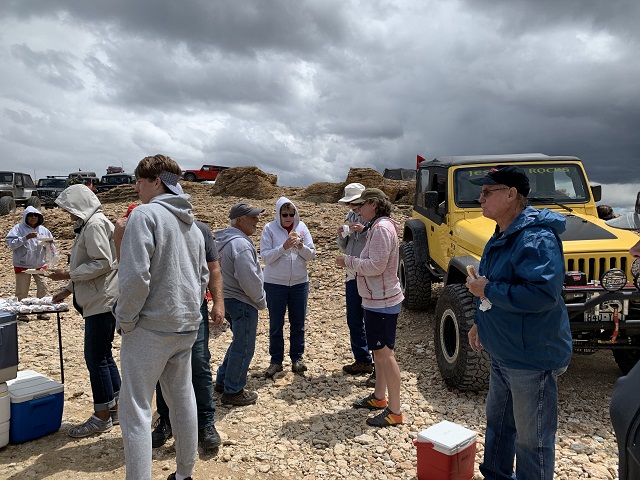 Â Jimmy john’s were enjoyed by all. 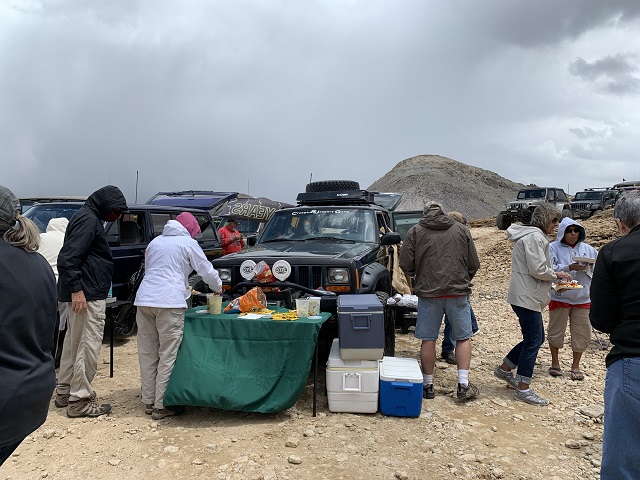 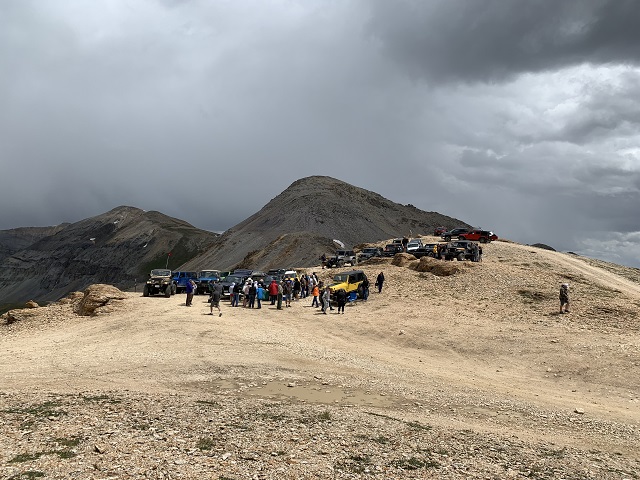 Â We took over the pass. 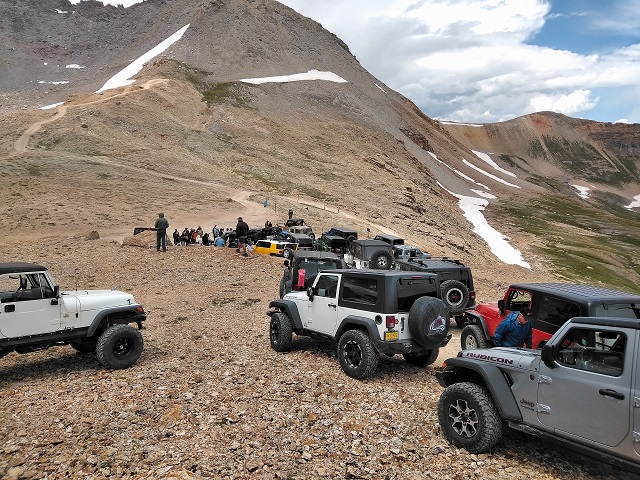 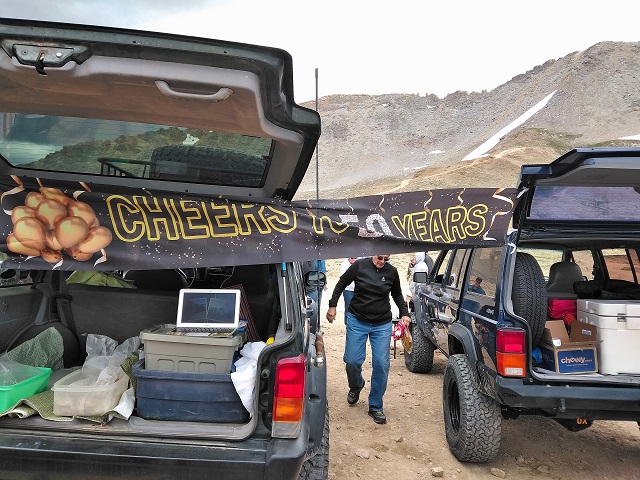 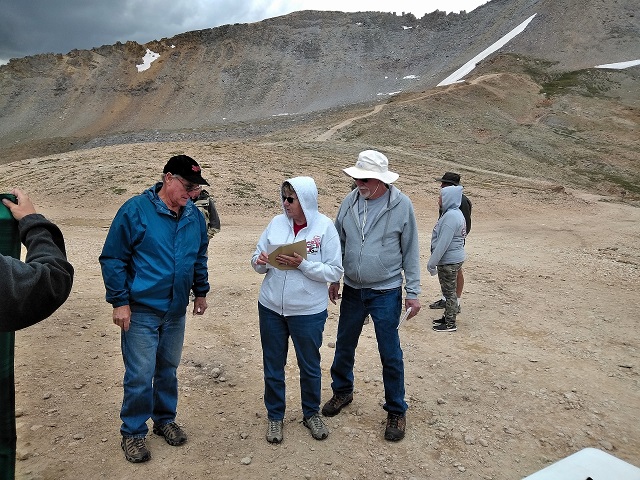 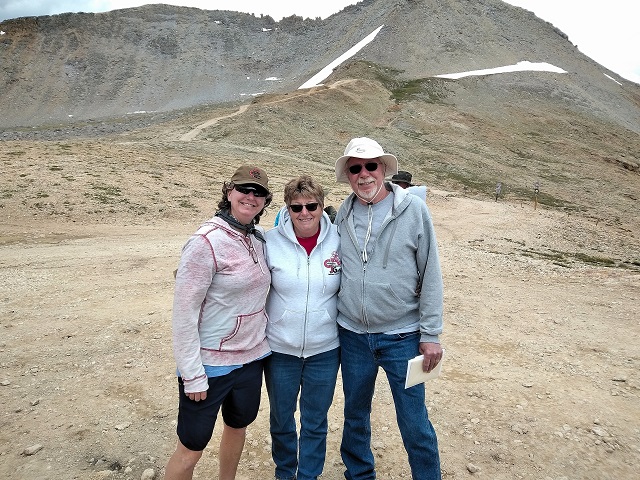 Â They were so surprised. 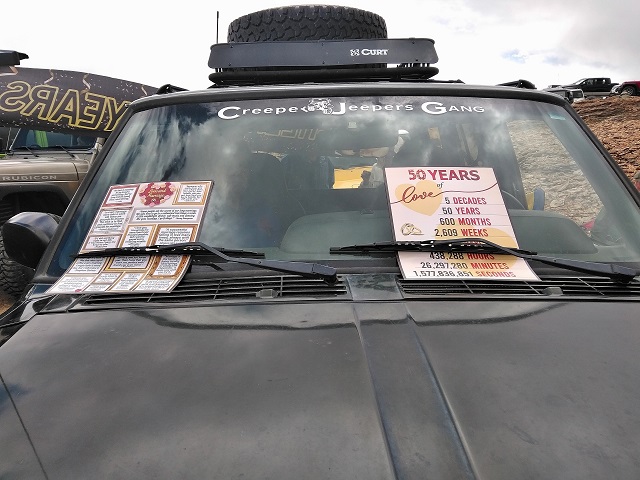 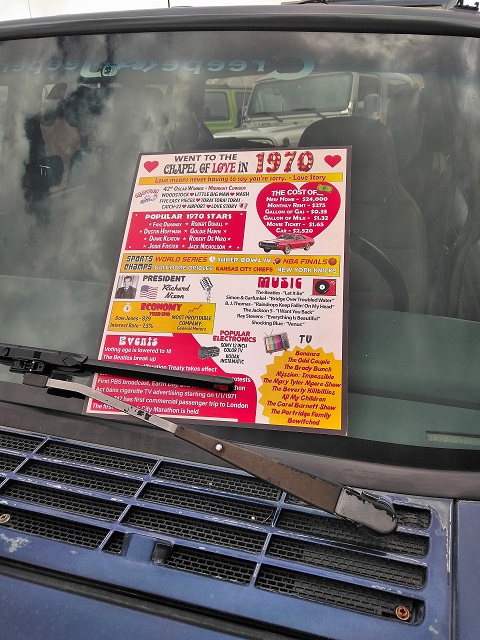